The Differences Between Black Widows And Brown Recluses

Home » The Differences Between Black Widows And Brown Recluses

The Differences Between Black Widows And Brown Recluses 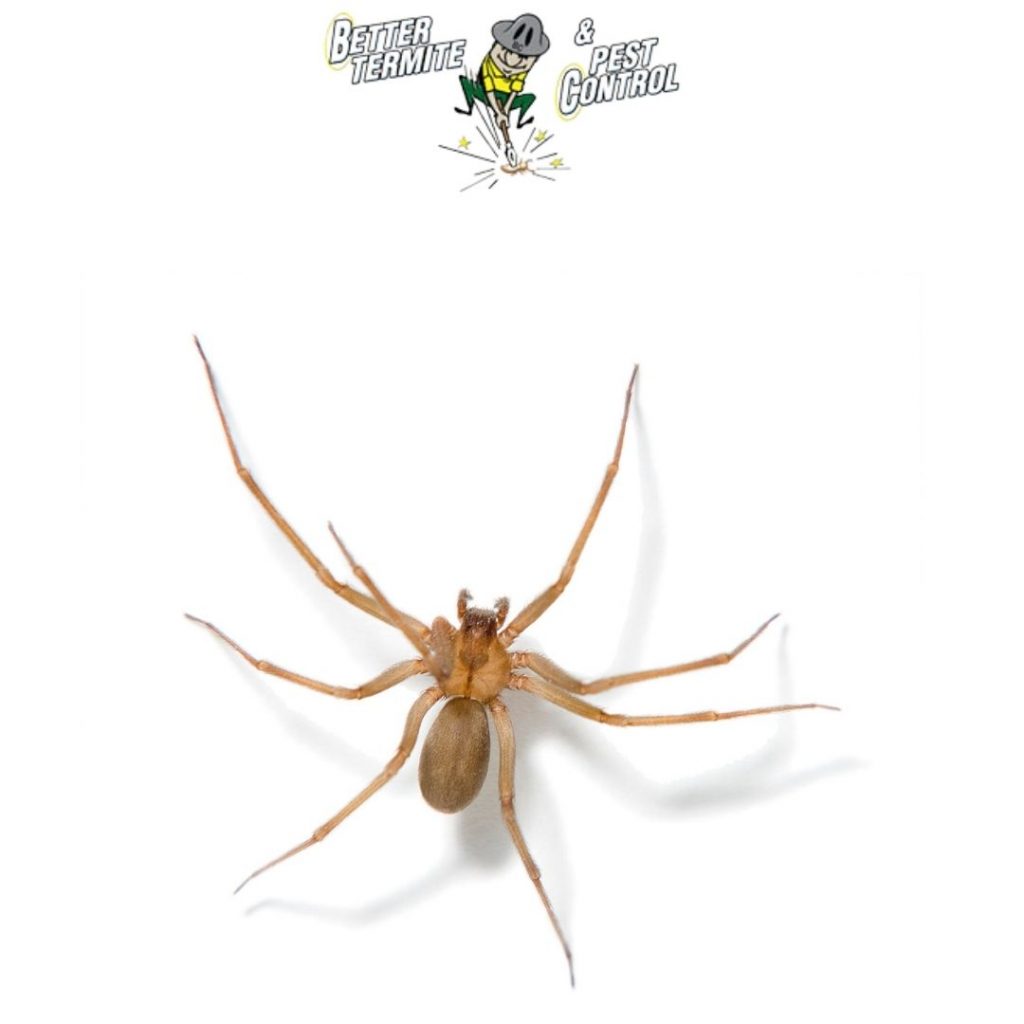 Out of all the spider species that enter the home, two stand out – the black widow and the brown recluse. Not only are these spiders extremely venomous, they are also quite common in home infestation. In this article we’re going to go over the differences between these two species.

Black widows and brown recluses are very easy to distinguish visually. Black widows have the iconic black, shiny coloration with a red hourglass on the abdomen. However, only females have this appearance. Male and spiderling black widows do not, and they are often confused for other species. Luckily, it is only the female that has the very potent venom, so misidentifying males and spiderlings is only an issue insofar as a black widow infestation does not go unnoticed. Brown recluses also have a distinctive appearance. They are brown in coloration, as the name suggests, but they also have a “violin” shaped marking on their abdomen.

While both spiders have a very powerful venom, the venoms themselves are very different. The black widow venom will induce nausea, vomiting, fever, sweating, chills and muscle cramps among other symptoms. It can also cause more severe symptoms such as unresponsiveness, seizures and shortness of breath. The black widow bite will rarely lead to death in the US thanks to the robust medical infrastructure

Brown recluse venom on the other hand causes necrosis – it causes flesh to rot. The bite results in intense pain that can last for several hours, and the bite location develops into a blister and afterwards into an open wound. The wound can be disfiguring.

The bites of both species require medical attention.

Both species like to hide in dark corners, but their webs will be quite different. Black widow spiders will build tangled webs on the upper parts of a building, and the spiders will hang upside down somewhere in the vicinity. Brown recluse webs are close to the ground, and they will use them as shelter.

The control process is similar for the two species. First the webs and the spiders are removed, and then residual insecticides are applied to protect areas of the home and deny the spiders entry into the home in the future.

If you have any questions about these two species, or if you suspect that you have a black widow or a brown recluse infestation, contact us today.

Better Termite is proud to be a family-owned business. We have serviced more than one million homes since our inception in 1968.
Google Rating
4.7
Based on 124 reviews

Janet MERRILL
11:59 13 May 22
Steve Cox came out for my ant problem. He was very thorough and explained what he was doing and that if any further problems I could just call back.

Jeannette Jeannette
16:07 12 May 22
Steve Cox came out to do my month pest control, he was professional and he listened to my concerns. He wore proper covers on his shoes and work a mask. He gave me helpful knowledge about what he did and made sure I understood exactly what he was going to do before he got started.

Jennifer Jarmin
21:39 11 May 22
Steve Cox was our technician and he was professional and personable. He wasn’t our regular technician- but did a great job at our monthly service.

Lexie Brown
14:04 10 May 22
We’ve been using Better Termite and Pest Control for a year or so and I highly recommend their services. Steve is so thorough and also very friendly! He even helped with a big spider inside the house the morning of a service. I placed a glass over it because I didn’t want to handle it!Steve took care of the spider webs outside too. Thank you, Steve!

Ama Adams
17:09 23 Apr 22
Felipe was great. He was responsive and efficient and reminded me about keeping my dog off the lawn. I also appreciated him asking if there were any areas to avoid for treatment.

kelly widelska
18:53 21 Apr 22
Thanks to Darryl G. Super thoughtful and helpful and got to work straight away!

John Clancy
14:44 21 Apr 22
I was very satisfied with the service. Our technician, Christian Guzman, was curtesy’s, professional and answers all my questions. Greatly appreciate the service and look forward to his next visit. Regards!

Katherine Gamao
14:35 20 Apr 22
We were very happy with our technician FELIPE. He was very professional and was sure to communicate with us before and after he sprayed to see if we had any questions about the service being performed. He did a thorough job spraying the outside of our home. Thank you.

Dixie Berman
20:38 19 Apr 22
Felipe is a nice young man who applied my Mosquito Treatment today. He was very professional and took the time to tell me areas of concern to watch for where there are drains and excessive foliage- places where mosquitos love to gather. I appreciated his time today to explain these things to me. He was an excellent listener about my concerns and had the answers I was looking to find out. Thank you Better Termite for such a knowledgeable technician you sent my way today.

Sara Fennell
22:26 18 Apr 22
I had Felipe as my technician. He was very profesional and did an amazing job at spraying the outside of my home. With the warmer weather approaching we are excited to be mosquito free. And we feel so relieved! I highly recommend Felipe from better termite. Thank you.

Gerald Moore
17:43 18 Apr 22
Steve Cox just came by and serviced my place. He was on time, offered advice and was very thorough! Pleased with the service!

Melisa Lanchipa
04:59 15 Apr 22
Thanks to better termite and pest control my family can enjoy our yard! Felipe, our technician was kind, courteous and professional. Do not hesitate to call.

jazmine martinez
00:11 15 Apr 22
I had Felipe as my technician and he was great! He called me when arriving to my house and proceeded to spray my backyard, Front yard and the bushes by my driveway. He avoided my vegetable garden as I had instructed. He took his time doing the treatment and was very polite. I highly recommend this company and highly recommend FELIPE as the Technician, excellent customer service.

Scoob “ScoobUWU” UWU
22:34 14 Apr 22
In preparation for the warmer months FELIPE came by and a great job on the exterior of my house. Very thorough and extremely communicative in letting me know what he was doing. Highly recommend and will use again.

Laurie C. Kanter
17:43 25 Mar 22
Steve and Rob were very professional and friendly. Steve explained every step he took, what he saw, and made preventive recommendations. I also like that this is small business and not a corporate company.

Janet Kim
15:38 23 Mar 22
The receptionist was cheerful and professional and set up my appointment time. I was called in the morning before the technician came and he told me when to expect his visit.Darryl was friendly and professional and showed me where the ants were living and explained the process before and after the treatment.

Kevin Bradley
14:47 15 Mar 22
The technician I worked with was Steve Cot and he was on time, courteous, and really helpful!

William Snyder
13:15 09 Mar 22
The inspector arrived on time, conducted a thorough inspection, both inside and outside. He was courteous and answered our questions thoroughly. Excellent!

Ms. Sam
15:51 08 Mar 22
All-in-one customer….Felipe was awesome! Above and beyond a thorough inspection. Thank you!

Hero Tran
23:28 06 Mar 22
Darren is very thorough and a real pro. Best pest control. Period. Haven’t heard a peep from my wife who is terrified of bugs. Worth every penny.

Shannon Presley
21:07 04 Mar 22
Our technician Darryl has been providing us with friendly, thorough pest control treatment services every other month for many, many years! Whether it’s an early morning stop or the late afternoon on a Friday, Darryl arrives on time, with a positive attitude and friendly conversation! The pest control treatment is very effective and allows us to live pest-free (anything we find is already dead) and stress free in our home. The service and product are exceptional!

Chessmaster Benz
23:04 03 Mar 22
I would like to thank Daren & Shay. Daren has been doing our inspections for the quite awhile. He’s always punctual and does great work. He’s responsive and answer our questions professionally. I highly recommend Better Termite. I have used them for 7 years and have always been helpful.

AnneLaure Luciani
17:41 03 Mar 22
Daren has been coming to our house for years and always does a great job. He always asks if we have any questions or concerns before starting and is always very helpful. Daren and Shay were both at our house today and they did a great job spraying all around, taking the time to pick up outside mats and move pots and all that. We are very please with Better Termite!

Hilary Riedemann
01:51 03 Mar 22
Used them for years and they are great. Attentive and responsive! Daren and Shay are great!

Mary Bailey
15:32 02 Mar 22
Awesome company! Daren has been coming to our house for a couple of months and it’s been great. Shay also is a great addition to the team. 10/10 recommend.

EJMIV
01:09 01 Mar 22
Reighn over at Better Termite was accommodating with scheduling. The technician that serviced our home was very knowledgable, courteous and proactive. It was a great experience.

J Z
18:08 24 Feb 22
I had a problem with roaches and my friend had suggested to this company to me. The technician that came to my house was Rob and he was fantastic! Explained everything very clearly to me and was very personable. He was able to solve my roach problem, if they ever come back I know who to call.

Amen Abebe (SniperzYT)
13:49 24 Feb 22
Excellent service!!! Felipe, did a great job and was very nice.
See all reviewsWrite a review